Networking Tip #1: Expand Your Sales Force
When you attend a networking event, do not see the people there as potential clients, but as potential sales associates. You are not there to sell to those people, but to let them know what you have to sell when someone is buying. Teach them what it is you can do, or what is your niche. Do the same for them. Listen to their niche market and remember it. Networking is truly a “give and take” experience.

Networking Tip #2: Find Your Niche
You are different than every other person in the world. You do something no one else does. Even a wide open industry like realtor or financial planner can be targeted. Who is going to remember you if you say “I’m looking for anyone who wants to (buy or sell a house) (insure their financial future) (blah blah blah)”? Who? Probably nobody. Find your niche. Find the one group of people you help the best. Concentrate on that niche and be the best in it. Don’t try to be the “Swiss army knife” of networking. The person or company that tries to do everything will be competing with everybody and will exchange leads with nobody. “Trying to be everything to everybody ends up as nothing to nobody.” Some guy I know says that every Friday at his leads group meeting.

Networking Tip #3: Introductions
When you meet a new networking associate, it is important to ask them how they want to be introduced to your sphere of people. Personally, I like people to introduce me as “a good guy to know in this industry” and perhaps yours would be something similar. Remember, if you don’t tell them how to introduce you, they might not do it the way you like.

For example, I know who Heidi Klum is, and I can probably find her cell phone number on the internet somewhere. Does that mean she will take my call? You get the point.

In every networking and marketing activity, name branding must be one of your essential goals. Make sure your prospective clients know who you are, and most important, what you can do for them.

Networking Tip #5: Stop Selling (and let people buy)
I’m always amused and somewhat disappointed when the “Network N00b” shows up at a networking event and tries to “sell” everyone at the event. Unless otherwise instructed, you can usually count on a “follow up” cold call from these people the next day. (I do not like receiving these calls, and I’m sure most people are in agreement with me.)

Instruct these people on key phrases to look for when they are speaking with other people. For example, at EmployerNomics we ask people to be on the watch for employer problems, such as payroll difficulties, trouble getting insurance such as comp and liability, HR compliance issues, or not happy with their current benefits plan.

Now some of those folks may become your clients later, in fact that has happened with me in networking groups, but I don’t treat them that way. Why? Because I don’t want to be treated as a “prospect” and neither do you!

Networking Tip #6: Longevity Counts
It takes time to get to know people and trust them. Don’t go to a couple of meetings and say “networking didn’t work for me.” It took me 4 months in my first networking group to get a lead. Some I still have not gotten leads from, but I am not giving up that easily. People need time to trust you, to trust you with their friends.

Nobody wants to give a lead to someone they don’t trust.

Networking Tip #7: The One Minute (or Thirty Second) “Elevator” Speech
Sometimes you attend a networking group that is large enough to limit you to a minute introduction. You should have one of these ready. 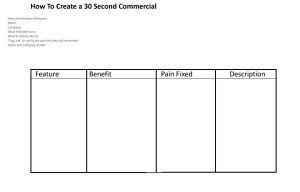 A handy diagram for designing a 30 second commercial

For example, I use this one:

“I’m John Will Tenney with EmployerNomics. We develop Payroll, Insurance, HR and Benefit packages for Business Owners that want to use group buying power and basically have “HR in a box.”

Our typical payroll customer wants to let someone else do the work, take the tax liability and periodic filings as well. They realize that in house payroll costs them time, money and a seat that could be productive.

Some Business Owners are annoyed by ridiculous deposits for workers’ comp, extra fees, annual audits and mistakes on claims that cost them time, energy and money.

Others are sick and tired of worrying about HR issues like lawsuits for wrongful termination or sexual harassment, unemployment claims, EEOC issues and high turnover. They would like to “turn that over” to someone who can make sense of all the “mumbo jumbo.”

Some employers are even considering dropping Health Insurance Benefits due to constant increasing rates but are afraid of losing employees.

Does any of this sound familiar?

We help you spend time ON your business, not IN it. I’m John Will Tenney and you can contact me at EmployerNomics.com”

I will change the example from time to time but you can see that it’s easy to make a paragraph that you can say in 30 seconds to a minute.